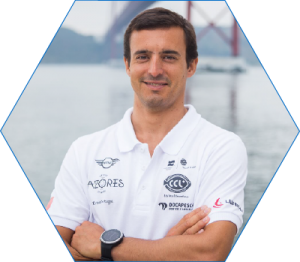 F. Reis is a 35 year-old Portuguese entrepreneur and a nautical sports addicted. Two weeks after being born, his parents took him for a sailing boat trip, and initiated a lifelong bound to the sea. Born in Lisbon, he started to learn how to sail alone at the age of eleven and after 7 years of competition he won several regattas and represented Portugal in many international competitions.

Besides sailing, F. Reis also practices surf, wakeboard and windsurf, but it was kitesurf that caught his most interest, since the sport gathers the best of all his favorite sorts. In 2005 he became the national kitesurf champion and in 2006 the vice-champion, also achieving a fifth place on the world circuit PKRA.

F. Reis has a master degree in Industrial Management and Engineering, has worked as a consultant, but found in the nautical activities his passion and started developing new events and extreme projects for a living.

Currently he holds the world record for the Longest Journey Kitesurfing without stops, achieved in 2015 between Lisbon and Madeira Island, covering 874 Km of the Portuguese Sea during 48 intense hours on top of his board.

In 2017 F. Reis completed the connection of the Portuguese territory by sea, kitesurfing from the Azores islands to Lisbon in 10 days. F. Reis is currently working on new challenges at sea, while managing his own company, speaking for companies, being part of Ocean protection campaigns and chartering catamarans in Portugal and abroad.

F. Reis is in the top of the most genuine and inspiring speakers today, supported by a unique history of entrepreneurship, courage and determination, around the Portuguese Sea. After reaching two world records of the greatest non-stop kitesurfing trip and being the first man in the world to sail two nights in a row on top of a board, this born communicator decided to take his experience and share it with the most various audiences. From the most competitive top teams to a simple work group, any audience gets a huge boost from a talk from this young entrepreneur. The lectures can be more focused on different episodes that happened in the various odysseys lived, chosen according to the message that is intended to be passed on to the audience.

For messages linked to Motivation, reaching goals that seem impossible, the talk is focused on examples that have made and still make F. Reis go forward rather than go backwards, endure pain in the most extreme conditions, believe and think of the joy that is obtained after reaching a difficult goal and to be able to visualize it even being many miles from reaching it.

For messages linked to Leadership, the focus is on entrepreneurship and innovation, which leads F. Reis to “drop” and believe in his extreme projects, which involve pioneering challenges worldwide, against all opinions and probabilities that they would be successful. The preparation that lies behind leadership, coupled with a good team.

For messages related to Team building, F. Reis reveals the work of the people behind each project and how crucial is the effort to integrate the team and forget about the highly desirable individualism. The team brings complicity, company to overcome the obstacles and has an unequaled capacity of motivation. Only a motivated team can face a challenge of 52 hours in a boat (or better, a “shell”) of 6 meters, without seeing land.

The conferences can be given in the following languages: English and Portuguese.

HIRE F. REIS FOR YOUR EVENT: