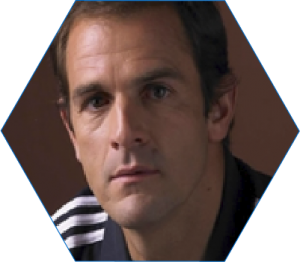 “The Alex Ferguson of the Portuguese rugby”

T. Carvalho has an undergraduate degree in physical education and sports, is technical director of the Cascais Dramatic and Sports Group, Consultant to the International Rugby Board for the strategic plan for sevens, speaker at conferences on leadership, motivation, team management and communication, University professor; sports commentator in television and columnist in newspapers.

When he picked up the National Rugby Team in 2001, Portugal ranked 30th in the world and with him as a coach it rose to 15th place. Because of his leadership and technical guidance, Portugal won for the first time several international competitions such as the XV European Championship (fifteen rugby), Seven European Sevens (rugby of seven), 10th place in the Sevens World Championship in Hong Kong among 94 participating teams and the 1st place of the University World Championship. A highlight of his career as a coach is the participation of the National Team in the 2007 World Cup in Rugby XV (it was the first amateur selection to play the final phase with professional teams).

He was nominated for the best coach in the world prize by the International Rugby Federation in 2004.

Author of the book “Commitment: Never Give in, the victories in sports applied to companies”, he considers that work and dedication are the best weapons to achieve success. Teamwork advocate as a fundamental tool for achieving objectives.

The conferences can be given in the following languages: English and Portuguese.

HIRE T. CARVALHO FOR YOUR EVENT: